Adventures of a Travel Obsessed Girl, Trying to Find Her Place in Colombia

Cartagena is a relatively large city situated on the Caribbean coast of Colombia and its year round tropical climate makes it an ideal place to visit any time of the year.

The city is steeped with history and combines the old with the new in an incredible way. Throughout history the city was a major port in the Caribbean for imports and exports coming to and from Colombia, which provided its own share of problems as well as benefits. Cartagena needed protecting from not only invaders but pirates too, they built a stone wall all the way around the city to protect the people of Cartagena. In the centre of the city stands a castle built on a hill to look out over the city and warn the city’s people of incoming trouble. The most famous battle that took place in Cartagena was the Battle of Cartagena de Indias (1741), a naval and military battle between the Spanish and British which saw the Spanish triumph. The castle and wall are still standing today and you can take a tour of the castle, to see some of the best views of the city from the top, as well as walk through the many tunnels beneath the surface. The majority of the wall is still standing and you can walk on top of the wall and look down on the city, it still has cannons in place at various points. The wall is also home to a number of bars and restaurants, one in particular, called Cafe Del Mar, is an outside bar offering spectacular views of the city, ocean and amazing sunsets.

Cartagena also has very modern set of buildings on a spit of land connected to the old city with hotels, offices, high rise buildings and resorts. It is definitely eye catching to see the contrast between old and new.

Cartagena’s architecture is incredible, the buildings in the old city are colonial in style but individual in colour, they are Spanish and French influenced and very well maintained. Walking down the streets, dancers perform in the many plazas, there are delicious food stalls and live music. Cartagena truly is a magical city. 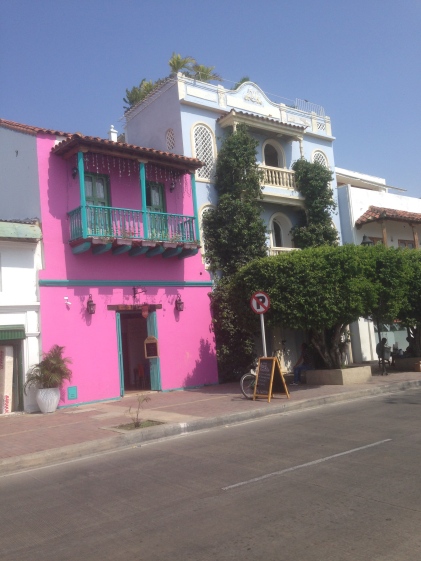 Cartagena is filled with incredible restaurants, bars and entertainment venues. Some of the restaurants I visited were La Cevicheria, a seafood and ceviche restaurant which offers some of the best seafood thanks to its top chef Anthony Bourdain. Juan del Mar is another great venue which is actually two restaurants, one pizzeria and a gourmet restaurant. It’s situated in Plaza San Diego and I ate one of the best pizzas I have ever had.

Cartagena also has a group of 27 islands called the Isle de el Rosario. These islands have white sandy beaches, clear waters and many are still mostly uninhabited. You can take a day trip to the islands, hire a boat and crew for the day or stay on one of the islands in a hotel. These islands offer many activities such as snorkelling, diving, kayaking, swimming and many more. The majority of tours leave from the port in Cartagena early in the morning, take you on a boat trip to your chosen island and stop at castles and different sights on the way. They provide you with lunch and drinks, the opportunity to explore, swim and spend the day on the island before returning to Cartagena late in the afternoon.

Cartagena has a lot of choice when it comes to accommodation, it tends to be slightly more expensive than other cities in Colombia but there is something for every budget with a variety of hotels and hostels. During my trip I stayed in an apartment which I found on Airbnb and it was perfect (it’s definitely worth having a look at Airbnb before booking your accommodation for great deals and hidden treasures). The only downside was that because I booked with Airbnb I didn’t have the opportunity to book tours or get local information, but it wasn’t too bad because when I wanted to book a tour I found the nearest hotel and they were happy to help me.

Cartagena is definitely a must for any trip to Colombia, it’s uniquely individual with its colourful colonial buildings steeped in history. It really has it all, the Caribbean beaches/islands, city life as well as history and landmarks.